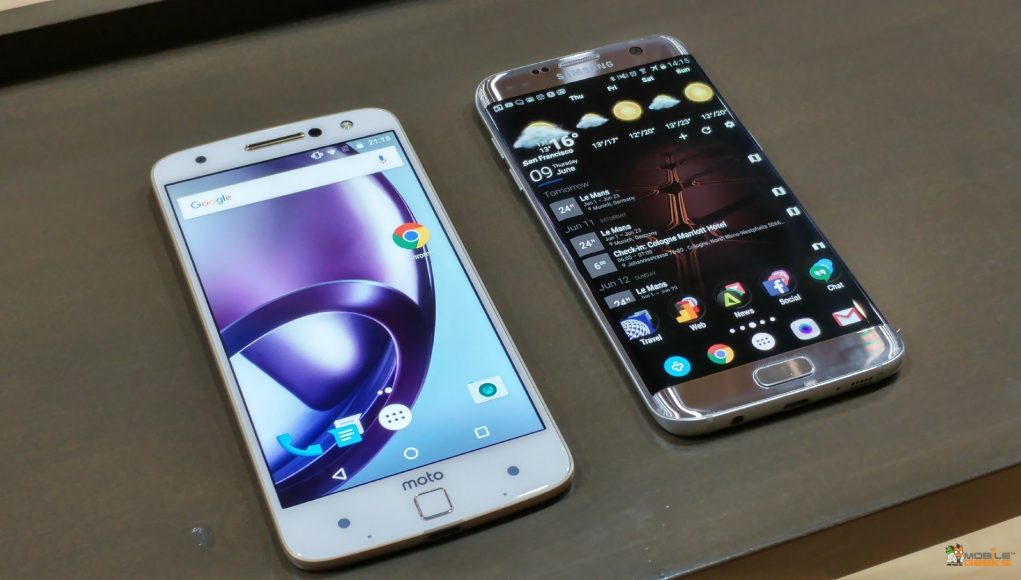 Samsung Galaxy S7 Edge is seen by many as the best smartphone out there. It is a giant and it is hard to find something better on the market. Moto Z created by Motorola/Lenovo was advertised as having a change but is this actually the case? Let’s take a look at how the devices stand up against each other.

The competition started to copy the premium Galaxy S7 design but Moto Z did not really do so. Galaxy S7 Edge is similar in design to a phablet and Moto Z is a little larger but not by much. The only really noticeable difference is in the weight as Galaxy S7 is 11 grams heavier. What is almost immediately noticed is that Moto Z is thinner by 2.5 mm. Moto Z is customizable to some extent and this is interesting but as you choose out of different options the premium feel of the smartphone is not going to remain intact.

Basically, Samsung Galaxy S7 Edge gives all that you would expect from the Samsung features and Moto Z will combine customizable options with premium options.

The playing field is quite level as both devices have a 5.5 inch screen but the ratio between the screen and the device dimensions is more interesting with Samsung. The Super AMOLED tech is present in the EDGE while Z comes to the table with AMOLED. However, this is just a brand name and not much of a gain in terms of technology. We also have a similar resolution, without 4k display in any of them.

This is what most buyers will be interested in. The processor is the fast Snapdragon 820 with Edge and Moto Z features OnePlus 3. Then, the graphics cards are going to be good for both while 4 GB of RAM are covered by both gadgets.

Whenever looking at performance we have to acknowledge the fact that these two smartphones are both very good. Playing games is going to be great as no lags will appear, even with the demanding games.

Related:  Galaxy S4 as the kitchen sink of all smartphones

Both of the cameras included in these two smartphones are going to be suitable for most possible buyers. Moto Z takes great photos but the camera shines in environments that are well-lit. When there is darkness present, quality goes lower. Galaxy S7 Edge is great in both conditions. Because of this, we have to give the edge to Samsung.

Moto Z cannot include a larger battery because of the thickness chosen. It ends up with 2600 mAh. This is good but not that great for phablet use. One day of use is basically all you get. Samsung Galaxy S7 Edge offers 3600 mAh and the system was pretty well designed so that the gadget can last 2 days without real problems if moderately used. Charges are fast with both devices.

Moto Z is a really good phablet but Samsung Galaxy S7 Edge is still better. We cannot conclude anything else. Tastes dictate the choice when looking at the utilized software and design.

3 Ways Technology is Transforming the World of Humanitarian Aid

How Tech Companies Can Ensure They Remain Covid Safe

Only Work With A Reputable IPad Repair Companies