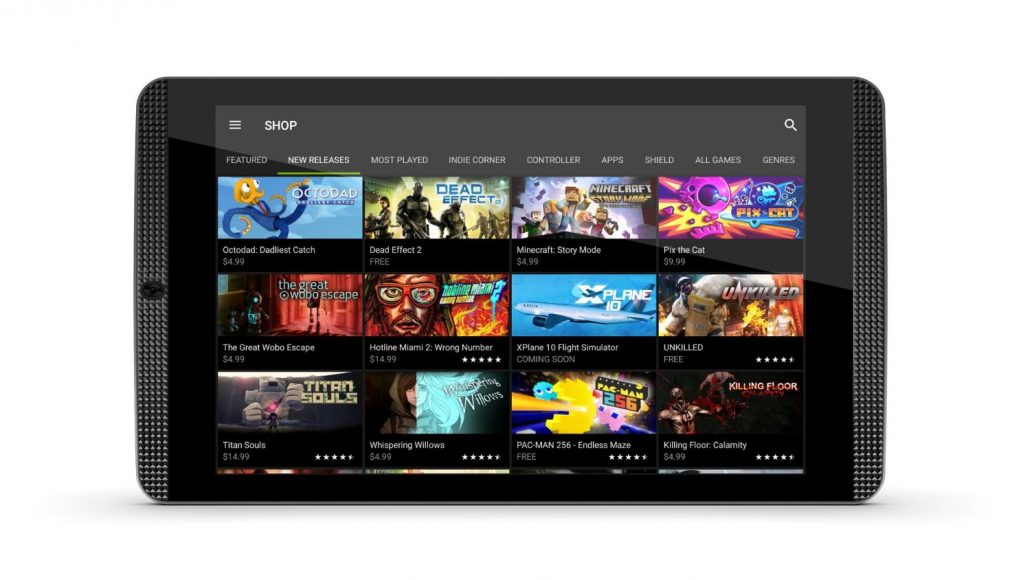 The Nexus 7 was really popular but now the NVIDIA Shield K1 tries to take it spots. This is quite a stellar tablet that does offer great value, exclusive features and a solid performance. The design is good and the tablet is strong enough to stream even PC games. The Android 7.0 Nougat is now supported, making it even better. The only problem is that a charger will not be included, if you want the full experience you will want to buy many costly accessories and the tablet is quite a fingerprint magnet.

Initially, the Shield tablet was not at all interesting as it was launched in 2014. Nexus 7 was simply way too good for the competition to have a chance. Things did change though and Google is working hard to complete with the iPad. NVIDIA looks to step in with the Shield K1. This 8 inch tablet has a good 1,920 X 1,200 resolution, is great to fit in your palm and will have a look that is quite attractive. Gaming goodness is plenty and since the Nexus 7 is not holding it back, this becomes the standalone. It is even cheaper than the last Shield Tablet while having much more power.

The anti-slip surface at the back is definitely something you will like but the problem is fingerprints can easily be collected. In the front you have a 5 MP camera, 2 front-facing speakers and there is also a 3.5 mm headphone right at the top. You actually find all the ports of the NVIDIA Shield Tablet K1 right at the top. Buttons run along the right upper hand side. The tablet features mini HDMI, micro USB and microSD.

Initially the tablet had Android 5.1 Lollipop but now you get access to the latest Nougat version. Upgrading is really easy to do, without problems. You can easily see the influence Google has on tablet designs. This one will lok like a stock Android version. NVIDIA only added Shield Hub and the Dabbler app for photo editing.

The most notable part of the NVIDIA Shield K1 is the micro superchip included, the Tegra K1. We have 2.2 GHZ ARM Cortex quad-core with the Kepler GPU architecture and 2 GB of DDR 3 RAM. All that you would normally expect in GeForce graphics is supported, including HDR lighting, subsurface scattering, Global illumination and tessellation.

When you look at performance benchmarks, the tablet does beat even models that are more expensive. This was not the case with the initial model so the improvement is definitely noticeable. The big difference appears in gaming power, making this one of the best tablets possible for those that want to play games.

You can buy different accessories for the NVIDIA Shield K1 like a controller, a cover that would also act as a good stand and more.

We can say that the NVIDIA Shield K1 would not be a great extra if you already have the main Shield but if you are looking for a really good tablet that is a very good gaming option, K1 is definitely a top contender. It is basically better than the second generation Nexus 7 and the iPad Mini 3. However, There are some tablets that are going to be better options than this one for some people though.

Why Does Machine Learning Work?

Best Android Security Apps You Want To Use