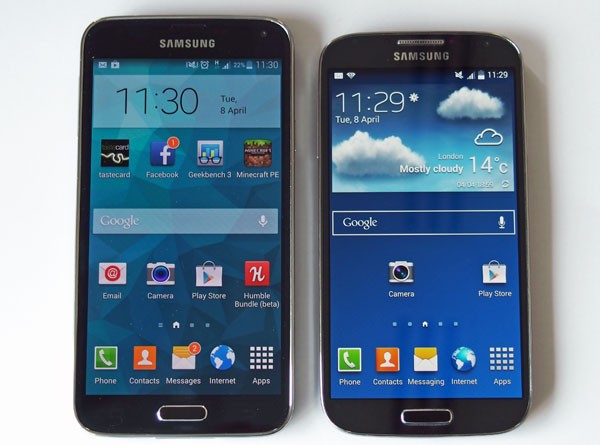 The Galaxy S5 is currently the flagship Samsung smartphone, unveiled at MWC last February. It clearly tries to impress fans and bring in even more fans with the upgrade done to the Galaxy S4 model. In order to figure out if the upgrade is enough to buy the new model, let us compare the two and mention those factors that are of importance for buyers.

Galaxy S5 is heavier by 15 grams and larger by 5X3.1X0.2 mm. It is interesting to notice the fact that most smartphone manufacturers try to make new models lighter and smaller but that is not what Samsung did.

Even if the size problem might be important for you, we need to also consider the fact that the casing is better, especially when referring to hands-on grip. We basically have a larger phone that is easier to handle. Samsung Galaxy S5 is the first ever smartphone from the manufacturer that is completely resistant to dust and water. Also, it showcases gold, blue, white and black versions while S4 only offered white and blue when launched.

Related:  The Best Cheap Phones You Can Buy Right Now

Both smartphones have Super AMOLED displays. S5 has a larger screen by .1 inches but lower ppi (432 vs 441). However, as expected, S5 has a higher resolution. The higher pixel density of the S4 is definitely a deal breaker for many. Screen differences will not be noticeable but overall size differences are.

Both models feature quad-core Qualcomm Snapdragon processor. However, S5 is an upgrade with the 801 model, which features 2.5 GHz instead of 1.9 GHz. When referring to RAM, both smartphones have 2 GB. Samsung Galaxy S5 is better when referring to browsing and gaming.

When looking at the software included, Galaxy S5 and Galaxy S4 have many similar, including Smart Screen tracking and S Voice. The good news is that we have some extra ones like S Health 3.0, perfect for fitness enthusiasts, a new news feed and the Samsung magazine feature.

Nowadays, with the focus put on online image sharing, it is normal to carefully look at the cameras offered. We have an upgrade of 3 MP with the rear-facing camera, 4k video recording when compared with HD 1080p video recording and .2 MP more for the front facing camera.

The truth is that Galaxy S4’s camera was not well seen in reviews. Galaxy S5 improves that. We have an increase of 1.241µm in pixel size and a larger sensor so photographs are more colorful and natural. If you are really serious about taking mobile photographs, the upgrade is noticeable. However, not as noticeable as we might be tempted to believe.

As everyone expects, the Galaxy S5 boasts a better battery, with 4 extra hours of talk time.

While both Galaxy S5 and S4 offer 16 or 32 GB of internal storage models, we see a difference when referring to expansion possibilities. S5 allows you to upgrade up to 128 GB through MicroSD while S4 has a maximum of 64 GB.

The truth is that the Galaxy S5 will be seen as better by a part of the interested customers but the additions that were done are definitely not spectacular. As you can easily notice, the only extras that are worth mentioning are those done in performance offered. However, this is only important for people that want to have the best possible gaming or browsing experience. The overall experience offered by Galaxy S4 is more than enough for many and with the Android upgrade option, it is usually enough.